It’s not what you say, it’s the way that you say it 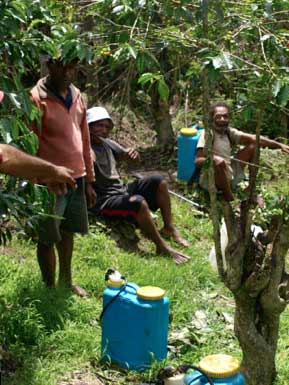 My Brother in Law became a father relatively late in life. Before he had a Child of his own he was not renowned for risk aversion. But after fatherhood he became super conscience about every possible safety risk. All breakable objects had to be removed, there were no sharp edges allowed and any potential falls had to be blocked off. My wife began to refer to him as “Safety Bob”.

Up until recently this was just an amusing family story but whilst working on sustainability systems in Papua New Guinea I had cause to remember the term Safety Bob.

The issue was that there were teams of spray operators on horticultural properties using no personal protective equipment, which was a non compliance to the standard they were aspiring to required.

We discussed how best to address this and in this hierarchical society it seemed obvious to give one of the senior members of the team the responsibility of making sure the safety was up to scratch. Suddenly I remembered Safety Bob and suggested it as a suitable title. They seem to like it and a concept was born.

This seemed to be a good lesson in the use of the appropriate language in an approach to achieve a particular outcome, in this case occupational health and safety.
But don’t get the impression that this is the first time I have used this technique or that the technique only really works in the developing world.

Some years ago I faced a problem where irrigation managers and the engineers designing and installing the irrigation equipment were at odds with each other.

The engineers would design and install the equipment and the managers would have no real part in it beyond advising what the crop needs were and how much water they needed.
Once the installation was completely engineers “threw it over the fence” to the managers who turned it on. When the dripper heads started to fail the managers accused the engineers of not building it correctly and the engineers accused the managers of not operating it correctly. This was a recipe for animosity.
I was developing a programme of water stewardship of the time and it was clear me that this issue had to be dealt with. I look back over my old quality assurance days and remembered concept called ‘burning in’.

Engineers are familiar with this concept which is based on the fact that the most number of faults are found at the beginning and the end of a product life. At the beginning manufacturing faults can cause early breakdowns, this is known as infant mortality and it is why we have product warranties. Once all these faults are fixed the product will continue to have a fairly fault free existence until it starts to wear is out late in its life.
To avoid the infant mortality stage many manufacturers run a product it for a period of time so that those early faults are found before delivery to the customer. This is a process called ‘burning in’.

In the system I included a period after the installation of irrigation equipment call the ‘burn in’ phase. During this time the managers and engineers monitor the operation of the system over a full irrigation season and monitor fault trends so that meaningful warranty period and maintenance protocol can be developed. Coincidentally this made the two parties ‘hold hands’ at the time when most faults would occur and encouraged them to resolve them together.

The engineers were quite happy with the concept as they recognised the concept of burning in. The irrigation managers were just pleased to be involved in a way that they had not been before. When the system was implemented the animosity evaporated overnight.
In in developing systems in any environment it’s important to consider all the factors, be they cultural, regional or issues of professional pride. Success is never about forcing the system down somebody throat but developing it with them and having them own it.